Are Hollywood's Ice Age Animals on the Money?

Share: Share page on facebook Tweet this page
"Does this movie franchise make me look fat?"
A 3D virtual model of an Ice Age sloth examines Sid, the Sloth from the Ice Age movies.

Our resident Ice Age vertebrate paleontologists, Dr. Matt Davis and Dr. Emily Lindsey, just published a new research paper describing what more than a dozen different extinct species found at La Brea Tar Pits probably looked like when they were alive. With collaborators from USC, they built scientifically accurate, 3D virtual models of Ice Age animals so that visitors can experience these animals in augmented reality (AR) at Tar Pits or even in the comfort of their own homes.

We presented Matt and Emily with Hollywood versions of three different Ice Age animals whose fossils are found at La Brea Tar Pits to see how they stacked up against our new, scientifically accurate models.
*This conversation has been edited slightly for length.

Baby Puss the saber-toothed cat from The Flintstones TV show 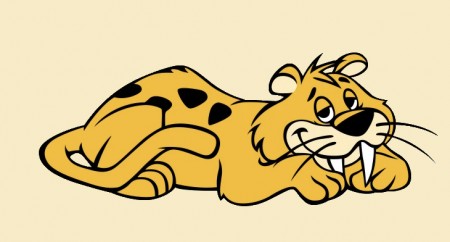 Emily: Wait, I thought The Flintstones had a purple dinosaur for a pet?
Matt: They did; Dino was the “dog”. Baby Puss was their pet saber-toothed cat. At the end of every show, Fred would try to put him outside but the cat would carry out Fred instead and lock the door.
Emily: Oh, and then Fred yells, “Wilmaaa!!!!!”
Matt: Haha yeah, that part!
Emily: …That kinda makes sense? I mean saber-toothed cats did have really strong forelimbs that they used to catch and hold down prey.
Matt: You mean the cat is showing off it’s strong front legs by carrying Fred out?
Emily: I guess, haha. But the tail is waaay too long. That’s wrong.
Matt: Yeah, they had pretty short tails, more like a bobcat. I like the spots, though. We have those in our model too.
Emily: Agreed. We still don’t know what their fur looked like but jaguar -or leopard-like spots make a lot of sense as camouflage for predators like saber-toothed cats that likely ambushed their prey.

Sid, the ground sloth from the Ice Age movies 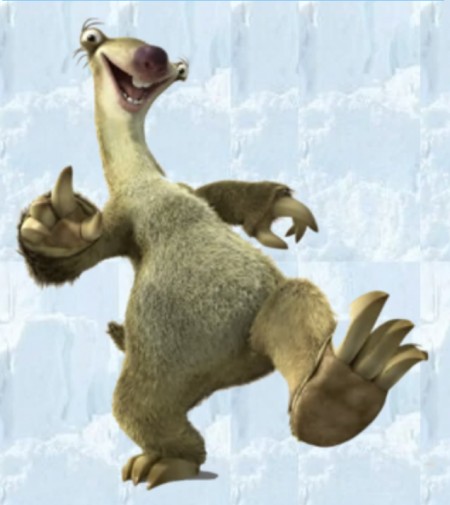 Emily: What kind of ground sloth is Sid even supposed to be?
Matt: Google says…[typing] “Sid the Sloth is a Megalonyx”.
Emily: Megalonyx jeffersonii, the Jefferson’s ground sloth? No way! He’s too skinny. Megalonyx weighed over 2,000 lbs.
Matt: Yeah, that seems wrong to me too. He’s too small. Compare him standing next to Manny, the woolly mammoth in the Ice Age movies. Woolly mammoths were what, 10ish ft tall? Sid’s only half that making him 5–6 ft long. Megalonyx was more in the 10 ft length range. I think Sid is a Shasta ground sloth (Nothrotheriops shastensis).
Emily: Yes, a Shasta ground sloth! That makes sense. We’ve found a few fossils of Megalonyx at La Brea Tar Pits but the smaller Shasta ground sloth is much more common.
Matt: Sid’s color and general shape are surprisingly close to our scientific model.
Emily: Yeah, those are things we are actually pretty sure of because paleontologists found a Shasta ground sloth with dried up skin and fur still on it preserved in a cave in New Mexico.
Matt: Sid’s claws are pretty accurate too but the way he walks isn’t quite right. Sloths could stand up on their back feet like he does but they didn’t walk around on two feet all day.
Emily: These sloths actually walked on their front knuckles and the sides of their back feet, a really strange way of walking that you can see in our animated model. Ground sloths were so weird!
Matt: But not weird enough to have big bug eyes on the side of their head like Sid, haha.
Emily: Yeah, those aren’t sloth eyes. Those are more like the eyes on [thinks]…a frog?
Matt: A hammerhead shark?
Emily: Haha, yeah Sid the Hammerhead! 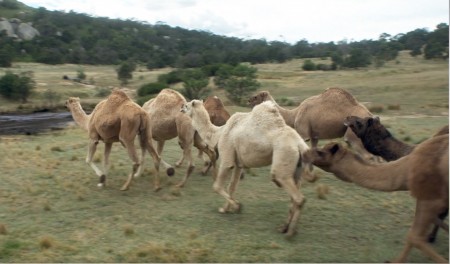 Emily: Camels! And they are running toward a tar pit!
Matt: Haha, only paleontologists like us get more excited by camels than saber-toothed cats.
Emily: But you rarely see this species in movies or TV. They always go with the fearsome predators like dire wolves or saber-toothed cats, not the more common herbivores.
Matt: Yeah, it is actually really cool that they used these in the show too because everyone associates camels with deserts in the Middle East but they actually evolved first in North America. Camels are native to Los Angeles. Most people don’t believe me when I tell them that.
Emily: Did they just use real, living camels for this scene? I don’t think those are CGI.
Matt: Those look like living dromedary camels to me, which is actually pretty accurate. The fossil camels we find in the tar pits (Camelops hesternus) were closely related to dromedaries and had very similar skeletons so they probably looked about the same.
Emily: But we still don’t know if Camelops had a hump or not like living camels even though we put one in our model. That kind of soft tissue doesn’t preserve in fossils.
Matt: The fossil find they describe in the show never happened though, right? It was a big plot point. The reason one of the characters [Sam] thinks they are in the Ice Age is that he says the Tar Pits museum dug up eight fossil camels that were all trapped in the tar at the same time 12,000 years ago. He thinks they are witnessing that entrapment event.
Emily: Well, we’ve never reported a discovery like that but it’s not implausible; we do have pits with lots of camels in them. In fact, herbivores that live in herds like bison, horses, and—yes—camels probably did get trapped in groups sometimes. The thing is, it was usually the juveniles. The adults would have been strong enough to get out of the asphalt traps most of the time, but a lot of the babies stayed stuck. There are still tons of fossils waiting to be excavated and radiocarbon dated at La Brea so who knows? Maybe we’ll find Sam’s herd of camels some day.

So there you have it. Sid is a Shasta ground sloth and camels are cooler than saber-toothed cats.