On Endangered Species Day, our fish curator and garden director talk about the imperiled species under our care.

Thriving in Our Nature Gardens

As many as half of California’s more than 6,500 species of native plants are considered rare, threatened, or endangered. Some are naturally rare, occurring in very restricted habitats in the wild. Far more are in jeopardy due to habitat loss from urban development, agriculture, manufacturing, flood control measures, or competition from invasive species. A few of these species are represented in the Nature Gardens and one is also thriving in the Pleistocene Garden at La Brea Tar Pits.

Nevin barberry, an evergreen shrub that was once widespread, is now restricted to just 14 sites in Southern California.

Nevin barberry (Berberis nevinii) is an evergreen shrub that occurs in sandy soils along the edges of washes, in canyon bottoms, and on steep north-facing slopes within chaparral, coastal scrub, and oak and riparian woodlands. Once widespread, it is now restricted to just 14 sites in Southern California. A total of roughly 250 individuals are left. Thankfully, existing plants are capable of re-sprouting after wildfires. One of California’s most prickly shrubs, Nevin barberry, is nonetheless a popular plant in gardens. It puts on a fabulous display of fragrant yellow flowers in early spring that ripen into equally showy, juicy red fruits. Many species of birds and mammals eat the berries and, despite poor germination in the wild, carpets of seedlings sometimes appear at the base of mature specimens in cultivated settings. This durable, long-lived native thrives in full sun or part shade with little to no summer irrigation.

A popular plant in gardens, the Nevin barberry puts on a fabulous display of fragrant yellow flowers in early spring.

Trask’s mountain mahogany (Cercocarpus traskiae) is one of the rarest woody plants in North America. Only one population composed of just seven individuals occurs in one canyon on Catalina Island. Growing among coastal sage scrub vegetation, the species was discovered in the 1890s by Blanche Trask, a botanist who wrote about the Channel Islands for the Los Angeles Times. Back then, there were roughly 40-50 plants. Grazing by introduced, non-native mammals has greatly reduced the population. A few plants of this critically endangered species are in collections at botanic gardens and in NHM’s Nature Gardens.

Bush anemone (Carpenteria californica) is listed as threatened, not quite as imperiled as endangered status. Coveted by British gardeners since the 1880s, this highly ornamental, evergreen shrub bursts into bloom with a profusion of camellia-like white flowers in spring. It likes occasional deep watering during summer in Southern California gardens and protection from the afternoon sun. In the wild, bush anemone occurs in chaparral and woodlands on the west slopes of the Sierra Nevada foothills in Fresno and Madera counties. The 12 populations are threatened by development, logging, road construction, and overgrazing. Like many fire-adapted native plants, though, it will re-sprout from dormant buds.

When plants are on the brink of extinction, wildlife whose survival depends upon them are also in jeopardy. Cultivating these and other rare plants in the Nature Gardens allows us to raise awareness of biodiversity loss occurring right here in Los Angeles County.

You may not have to go very far to find endangered species. The growth of greater Los Angeles has put a strain on several fishes in the region, both along our coasts and in our rivers and streams. Freshwater animals in Southern California are particularly vulnerable, as changes to water quality, temperature, flow, and habitat can greatly affect local populations. Throw in a mixture of introduced species that either compete with—or prey upon—native species, and local fauna can have a hard time surviving.

The Santa Ana sucker (Catostomus santaanae) is an example of a local endangered freshwater fish.

The Santa Ana sucker (Catostomus santaanae) is an example of a local endangered freshwater fish. Restricted to a handful of river drainages in Southern California, this species prefers clear, cool water in streams with gravel or sandy bottoms. With downward pointing mouths, they feed on algae and detritus among the rubble. Unfortunately, many streams they inhabited have been converted to concrete channels throughout their range.

There are endangered local marine fishes as well, such as our enigmatic giant sea bass (Stereolepis gigas). Historically, this species was known to grow over seven feet in length and weigh more than 500 pounds! 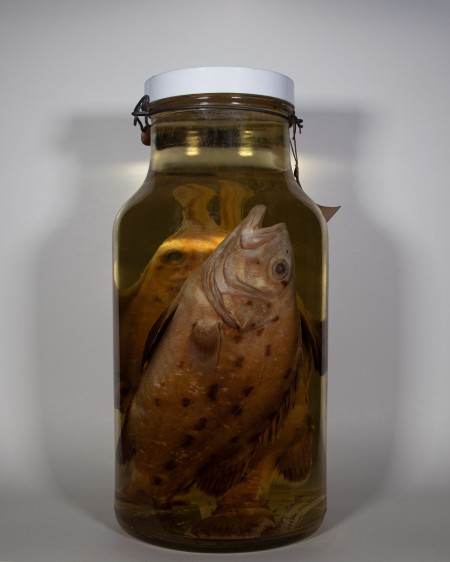 Giant sea bass historically was known to grow over seven feet in length and weigh more than 500 pounds.

These fishes can live a long time, but mature very slowly, making them susceptible to overfishing. While they were once abundant in Southern California, consistent pressure from commercial and recreational fisheries drove this species to near extinction. Since protective measures were put into place in the 1980s, this species has slowly been making a comeback, but still needs our help and protection.

Sawfishes of the family Pristidae are an example of a more exotic endangered marine species. There are only five species in this family, and they are all either endangered, or critically endangered. These fishes, which are actually a type of ray, give birth to live young, and mature slowly, eventually growing to lengths over 20 feet in some species. They use their extended rostrums that are lined with teeth to find food buried beneath the sand. Unfortunately, these unique toothy rostrums have also become a trophy, and their sale, along with the fins of the fish, have led to overfishing of all known sawfish species.

By preserving and housing specimens of these species, our museum allows researchers to study these endangered species without disturbing them or collecting them from their natural environment. The research that comes out from these specimens is critical for understanding how they fit in with their environment, and how we can help protect them moving forward.

The Natural History Museum's fish collection is one of ten internationally recognized ichthyological collections in the United States. The collection contains nearly three million catalogued specimens, including representatives of most fish families.