NHM Scientists Seek Out Birds From the East 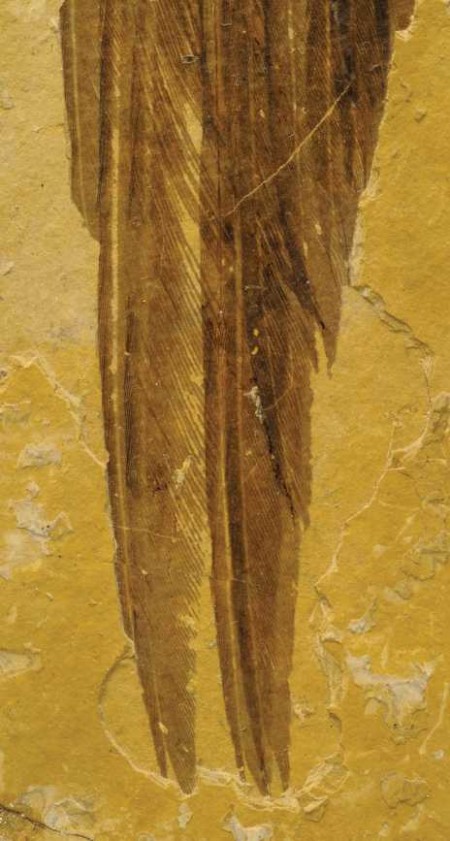 Close up of dinosaur feather

The Tianyu Museum of Nature in the tiny Chinese town of Pingyi is about 400 hundred miles south of Beijing, and it takes five hours by train and taxi through the countryside to get there. On floor after floor of the massive pink stone building, fossils are laid out in polished glass cases. There are boulders of dinosaur eggs, thousands of sardine-like fish that died at once, pterosaurs, super-size minerals (including the world’s largest amethyst and turquoise), a herd of ancient turtles, and more. But Dr. Luis Chiappe, NHM’s Dinosaur Institute (DI) Director and the Senior Vice President of Research and Collections, has traveled here for the birds— exquisite 120- to 130-million-year-old fossils that only a few paleontologists from the West have seen.

“The spectacular fossils we find in China are rewriting the evolutionary history of many groups of animals and plants—the fossil birds from this part of the world are no exception,” says Chiappe, who is a world authority on the subject. “We know that birds are actually a type of feathered dinosaur, and these fossils are filling a vast gap that separates living birds from their extinct dinosaur predecessors.”

Chiappe and his colleagues in China—and back in L.A. at the DI—work methodically to fill that chasm, one small discovery at a time. In the Tianyu Museum’s lab, Chiappe points out a feature of the delicate fossil bird that’s embedded in a shale slab in front of him: a soft sac at the base of the neck where the ancient creature kept seeds for consumption later. Known as the crop, the same anatomical feature is present in birds that are flapping their wings around L.A. today.

Back up north in the urban bustle of Beijing, Chiappe and his team continue their bird hunt in the lab of the Beijing Museum of Natural History, which houses a collection of more than 200,000 plant and animal specimens. That includes plenty of feathered dinosaurs, which illustrate the unmistakable bird-dinosaur link. Behind the scenes at BMNH, Collections Manager Liu Di shows the team an assortment of hidden fossil treasures. The group sifts through the floor-to-ceiling stacks, opens the colorful silk boxes, and plucks a few specimens to bring to the lab for study. One is Confuciusornis, a common bird that lived 125 million years ago, named after the celebrated Chinese scholar. Chiappe has been honored as well; a fetching bird discovered here bears his name: Chiappeavis.

Chiappe’s multiple 9,000-mile treks to China over three decades have led to fruitful discoveries that are bringing the ancient aviary panorama into view. Primitive birds that once flew over the heads of dinosaurs had wings but also strong claws at their fingertips; most birds that lived during the age of dinosaurs had teeth, unlike those alive today. Maureen Walsh, the DI’s Collections Manager, has for more than a decade prepared fossil birds for study, cleaning the delicate bones and using putty and other substances to seal fissures in the stone. She explains that these ancient fossils were preserved so well because volcanic eruptions in China led to devastating events where the remains of animals and plants that lived in the thriving ecosystem sunk to the bottom of lakes. There, they were gently covered by settling sediments. As a result, soft tissues such as hair, feathers, and delicate structures, from wings of insects to the veins of leaves, are now embedded in stone. Becky Wu, a Taiwanese student who aspires to become an NHM graduate student, joined the Beijing team to get a peek into how to unfurl the mysteries of the fossilized birds. In the lab, Wu and Walsh marvel at the variations—the short beaks, ornamental feathers, and teeth for crunching. Many of the birds resemble marionettes with postures so animated they look as if they’re riding a bike, dancing, or lifting off the stone. “These fascinating animals have been perfect flying machines for a long, long time,” says Walsh. “They are out of this world.”

Birds have a rich and ancient past; their origins date back to the Jurassic Period, deep in the Age of Dinosaurs. The oldest known bird is Archaeopteryx lithographica—a feathered, crow-sized animal with sharp claws at the tip of its fingers, that lived about 150 million years ago, more than 80 million years before Tyrannosaurus rex walked the surface of the Earth.

THE DINOSAUR, THE CHICKEN, OR THE EGG?

In the Dinosaur Hall, find out what chickens (and other modern birds) inherited from their theropod dinosaur ancestors.

Do you know the word for dinosaur in Chinese? Kong lóng