Fish Since the Dinosaurs

Share: Share page on facebook Tweet this page
Since the extinction event that wiped out the dinosaurs 66 million years ago, fish have evolved and diversified, leading to the wide variety of fish species we see today.

Sixty-six million years ago, it was a tough time to be a dinosaur (since they were, you know, all dying), but it was a great time to be a fish.

According to a new study, many of today’s fish lineages emerged right around this time. It seems the extinction event that wiped out the dinosaurs (and other creatures) paved the way for the incredible diversity of fish species we have today, particularly among the spiny-rayed fishes, which make up about half of all known modern fish. With over 18,000 species, this group includes many familiar fish like tuna, cod, and lionfish (but doesn’t include things like sharks, lungfish, or salmon). 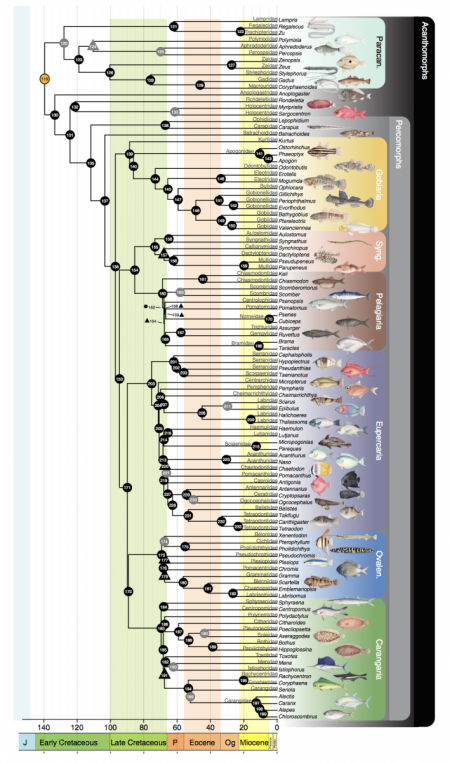 This detailed family tree shows how today’s fish are related. Lines separate when new species emerged in the past. Notice that many new branches started around 66 million years ago, at the rightmost part of the green vertical bar.

A team of researchers, including NHMLA Ichthyology Curator Chris Thacker, analyzed the DNA of 120 species of fish representing the major families of spiny-rayed fishes. By combining the DNA analysis with fossil data, the team put together an enormous family tree of fish, showing not just how they are all related but also about how far back each group emerged.

“The analysis is so comprehensive, we’re able to nail down a timeline for the evolution of fishes for the first time,” said Thacker. “Five of the six major groups exploded, with a lot of diversifying and new lineages, right around the time the dinosaurs went extinct. It was surprising how the timing across groups was so similar.”

But what about the one group that didn’t explode quite like the others? It just so happens to be Thacker’s favorite fish group — the gobies and their relatives.

“Gobies also had a big diversification then,” said Thacker, “but they’re an older group, so they were around before this all happened.”

It seems that gobies were evolutionary hipsters, setting trends that other fish would eventually follow — like becoming smaller-bodied and lighter-boned than their Mesozoic ancestors.

“Gobies are a microcosm of larger evolutionary patterns,” said Thacker. “It’s part of what makes them so awesome and interesting.”