Per L.A. County Department of Public Health, masks must be worn at all times indoors and in our outdoor Spider Pavilion. View our COVID-19 Safety Guidelines for more information.

At first, I was content just watching the bats fly around, dipping and turning across the night sky. But then I remembered I had a bat detector in my pocket. Nerd alert!

Happy (American) football season everybody! Yes, some scientists enjoy playing and watching sports in addition to searching for wild animals and staring at tiny things under a microscope. This is true for me. Growing up in a Nicaraguan family, playing and watching sports was a big part of my life. Nicaraguans are known to be baseball fanatics, but my mother and I, both being USC alumni, are also serious Trojan football fans. I’ve been watching the Trojans play at the L.A. Coliseum since I was a young boy and now I take my little brothers to games. But, even when a game is playing out below, I can't completely turn my scientist-self off–particularly when there are bats involved. Let me tell you about the bats that Fight On! 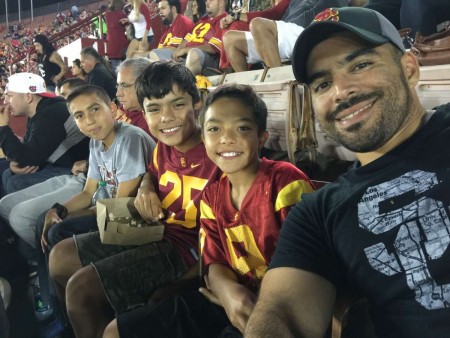 Enjoying the USC football game with my brothers and cousin, just before I saw the bats!
Miguel Ordenana

It was this season's home opener against Arkansas State. I attended the game with my mom, stepdad, cousin, and two little brothers. I stopped by my office before the game to pick up my bat echolocation (the ultrasonic calls that bats use to communicate, hunt, and find their way around in the dark) detector because I was going to scout out an area for a bat program the following day. I put the detector in my pocket (iPhone ultrasonic microphone attachment) and rushed over to meet my family. We enjoyed the blowout game like any other fans do–cheering, high-fiving strangers, and eating delicious junk food.

It didn’t seem like the night could get any better until my 13 year old brother, Aaron, spotted something flying overhead and yelled, “Miguel bats!” I looked up, spotted one and exclaimed, “Good eye Aaron!” I stared for a while in awe and then I saw another, and then another. At first, I was content just watching the bats fly around, dipping and turning across the night sky. But then I remembered I had a bat detector in my pocket. Nerd alert! 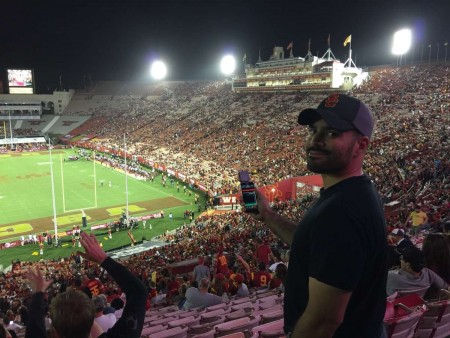 The game ended on a high note with the Trojans beating the Red Wolves 55 to 6.
Miguel Ordenana

I quickly fumbled for the detector, attached it to my iPhone, and began recording using the free Echometer app. Luckily, the detector was picking up their echolocations. Over the next 20 minutes I recorded over 100 sonograms (graphs representing sounds) many of which I hoped would help me identify the bats later. I couldn't wait to get back to a computer to figure out what species were enjoying the game just like my family and I were. But what were they doing here? As I was trying to capture the bats' echolocations, I noticed they were hunting! As they flew in and out of the arcs of light, I saw them pick off moth after moth. At this point I was standing at the edge of our section, reaching out so my phone's microphone had a better chance of recording the bat sounds. I was worried because I might have been blocking someone’s view of the game. But quickly I recalled we were on the way to a landslide victory, and then I heard a lot of other people talking about the bats. It seems the bats were putting on a show for other fans too, not just for my family.

When I got back in the office and analyzed the sonagrams, I found out the bats I had detected were Mexican free-tailed bats, (Tadarida brasiliensis). Fifty-two of the 105 recorded sounds, belonged to these bats. The species are known for their spectacular nightly emergence from beneath Austin’s Congress bridge as they leave to consume millions of insects (a lot of them being pestiferous moths) in a single evening. They are also known for their ability to adapt to urban areas by roosting in human structures. This species was detected in Exposition Park for the first time in 2013 by our bat detector in the NHMLA Nature Gardens. It was very gratifying to find out what species were flying overhead but it made me hungry for more answers. 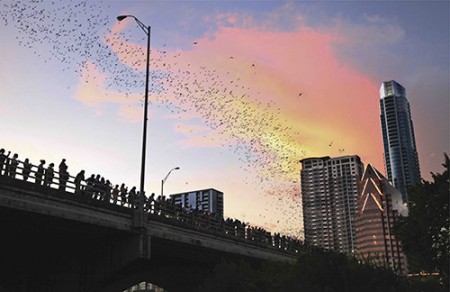 Are the bats roosting in dark corners and crevices of the coliseum during the day? Are there more than one species feeding at the coliseum? Do migrant bats use the coliseum structures like the Vaux swifts of downtown L.A. do on a seasonal basis? Who knows, but it is notable how one single eye-opening experience can inspire so much wonder in unexpected places. These moments remind us how many urban wildlife events are hiding in plain sight and as a result remain scientific mysteries. Perhaps, this story not only reminds us that wildlife spectacles sometimes occur unnoticed at commonly visited gathering spots (stadiums, amusement parks) but that there are other amazing wildlife moments we can observe once we simply begin looking.