Her name was Prince, and she was funky

“Her name was Prince Rogers Nelson," says Leslie Gordon, the Manager of Vertebrate Living Collections. The animal was named for Gordon's life-long admiration for the artist, more commonly known only by a portion of his full name, "Prince". ""Prince" is what we called her  around the office." says Leslie. "And we didn’t know it was a female. Many amphibians can be very difficult to sex just from looking, and actually commonly turn out to be hermaphroditic upon necropsy. I think Prince the artist would be okay with a namesake that had a little bit of a grey area around her sex.” When she passed in 2018, Prince Rogers Nelson set a longevity record, recently reported in Herpetological Review as a joint publication between Research and Collections’ Herpetology Curator Greg Pauly and Education and Exhibit's Gordon. She was believed to be 9 years old at the time of her death.

"Longevity is a key aspect of the natural history of a species. Understanding how long individuals of a species can live can inform conservation and management plans," Pauly says, highlighting that “the increasing frequency and duration of droughts in California means that we worry that some populations might blink out during prolonged droughts. Knowing that western spadefoots can live for up to 9 years gives us hope that at least some individuals in a population might survive a prolonged drought such as the 2011–2016 Southern California drought.”

These frogs are found from northern California to northwestern Baja California, residing in mixed forests, shrublands, grasslands, inland wetlands, river floodplains, and sandy washes. Vertical pupils cut through gold-colored eyes that bulge from their stocky bodies, and their short legs end in feet with keratinous bumps, the eponymous spades that help these frogs dig. “These frogs spend much of their lives underground, avoiding hot, dry conditions by heading into mammal burrows, or digging their own burrows into soft, sandy soil,” says Pauly. 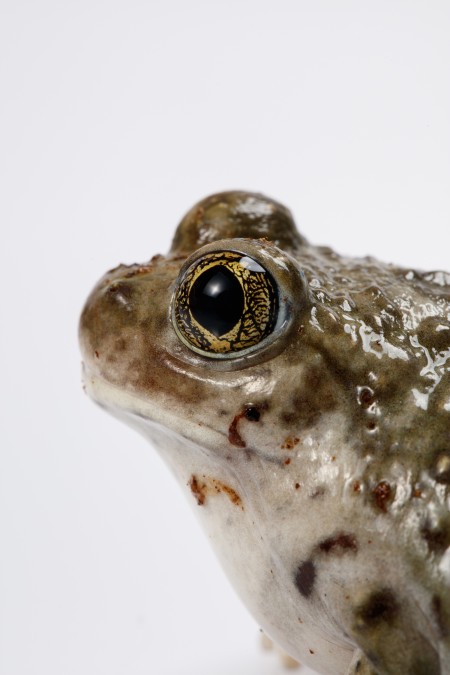 Rain and moist conditions will trigger spadefoots to come  to the surface to look for food like earthworms and insects or to migrate to their breeding sites to reproduce. They typically breed in vernal pools and seasonal creeks.

“Spadefoots have a very interesting defense mechanism. Their skin secretes a sneeze inducing slime that smells like peanut butter,” says Pauly. “In humans, these secretions can cause a person’s eyes to water and their nose to run. The assumption is that other mammals, including potential predators have a similar, and likely more debilitating response. With the potential predator having trouble seeing through watery, itchy eyes, and with the linings of the nose and mouth similarly irritated, the potential predator can’t maintain its attack and the frog can escape.“

A western spadefoot in the wild
© iNaturalist user kmherpkid

Once widespread throughout the L.A. Basin and adjoining valleys, in recent years western spadefoots have dramatically declined in California, persisting in just a few sites across the County. Urban and agricultural development have led to habitat loss, and non-native species like bullfrogs and mosquitofish have also contributed to their decline. The western spadefoot is now listed as a species of special concern in California.”To help native frogs, people can volunteer for stream clean-ups and help with removing non-native species like Arundo, which is a giant cane that can overtake streamside habitat, and crayfish, which like mosquitofish, consume the eggs and larvae of frogs,” says Pauly.

"But leave those native species where they are!" says Gordon. "Prince more specifically got her name after the album, "Controversy", because for a long time we actually called her the "Controversy Toad"." This was because of the somewhat heated story that went along with whether or not she should come to the Museum at all. She had been collected from the wild by some science-loving people, and then brought to a Science Festival to share. Because it had been handled by several people, Dr. Pauly, and other local biologists, asked that it not be returned to the wild. “It is illegal to collect wild amphibians without a permit, and putting them back can both bring disease to the local populations and interfere with genetics if not placed back precisely where it was found,” says Gordon. But some of the group who collected the toad were upset to see it put into the herpetology collection so young, so the compromise was to let her live out her natural life in the Living Collections, and then add her valuable genetics to the Herpetology collection after she passed.

Prince Rogers Nelson got the kind of TLC NHM’s Live Animal Program specializes in. “All animals in our care are granted the courtesy of a life of comfort they might not even get in the wild, which includes expert veterinary care, very high quality water, and carefully curated diets (That even includes carefully curated diets for the insects they eat!). She also got enrichment, such as providing her places to dig and climb, and daily attention to her every need,” says Gordon. Often arriving through rescue, ambassador animals like Prince Rogers Nelson make the wildlife of Los Angeles visible to guests of all ages, providing the opportunity to safely encounter animals, better understand our role in their survival, and hopefully inspire visitors with a spirit of conservation.

“On your next visit to the Natural History Museum, look for the fish in the Nature Garden pond. Ponds and other water features in California are often stocked with the non-native mosquitofish. Despite their name, mosquitofish eat much more than just mosquitoes and contribute to local declines in native frogs by eating frog eggs and tadpoles. The fish in the Nature Garden are Arroyo Chub, a native species that loves to eat mosquito larvae but does not eat frog eggs and tadpoles like mosquitofish do.” Greg Pauly
Share: Share page on facebook Tweet this page