Per LA County Department of Public Health, masks must be worn at all times indoors and in our outdoor Butterfly Pavilion. View our COVID-19 Safety Guidelines for more information.

Every year, NHM researchers (and sometimes, office folk like myself) make their way to an exclusive Utah dig site to unearth more and more dinosaur bones. 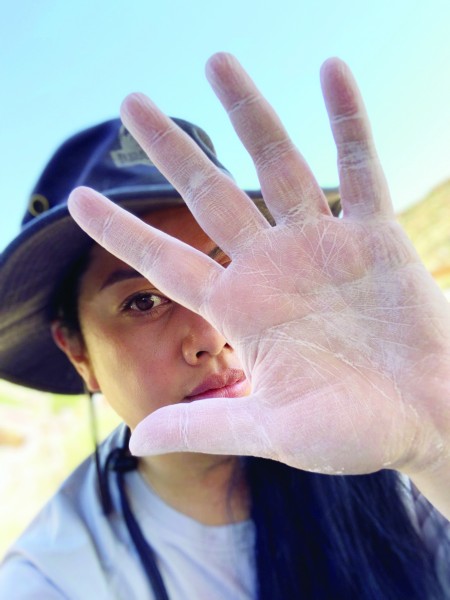 From 20,000 feet in the air, one gets a greater view of the world— even more so than at a 180-degree view. The earth below branches off into multilayered terrains of both dirt and bush, plots of land outlined by coursing roads and shimmering rivers. Within the most detailed of splinters, however, lies another world just waiting to be discovered.

Every year, NHM researchers (and sometimes, office folk like myself) make their way to an exclusive Utah dig site where Gnatalie — a 150-million year-old sauropod — once lived and inevitably died, leaving history ingrained in the rock of Utah’s land. Since its discovery in 2007, pieces of the herbivore and its familiars have been unearthed and transported back to Los Angeles, where NHM’s Dinosaur Institute paleontologists chip away the cast plaster and fossilized rock and, in the process, share new discoveries about these very special dinosaurs. 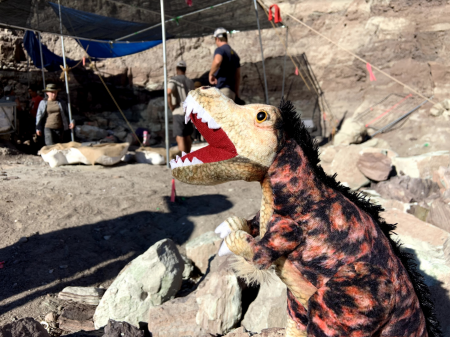 Ten-year-old me sitting in the theater during Jurassic Park, clutching a Dilophosaurus figure couldn’t have been happier to take part, texting “Dino Dig 2019!” to friends leading up to travel day. Easier said than done, however: It would be a flight from LAX to DEN, an additional connection, plus an hour-long drive into Utah before arriving at a nearby campsite and finally heading to the quarry to get down to business. With plenty of excavators, volunteers, and tools alike, the team rises with the sun and works ’til chow time chipping away at the rock shelves and clay surrounding the precious puzzle pieces of the past beneath a beating sun, sometimes in temperatures hotter than 100°F. Along for the ride is Hunter, NHM’s resident T. rex, though in a much smaller, plushier form, and he bears nothing but a playful grin every step of the way (you can see recaps of his adventures via @NHMLA on social media).

While my trip (part of the weeks-long Haaga Dinosaur Expedition 2019) was short, it was nothing shy of fruitful in education and information, led by the Gretchen Augustyn Director of the Dinosaur Institute, and NHM’s Senior Vice President of Research and Collections, Dr. Luis Chiappe, who at any given moment is willing to provide insight and direction, passing on knowledge that simply can’t be learned from a book. From plaster coated palms to dino-dusted skin, getting hands-on and being in the field gave me a deeper appreciation of the work such professionals do.

Next time you take a stroll in front of our Dino Lab, take a closer look at our on-site paleontologists as they work on opened “jackets” (tissue and plaster wrapping that protects the fossils) right before your very eyes. It may just be one of 47 jackets of sauropod, theropod, and ornithopod bones fresh off the truck from the Beehive State.