Imagine a pack of dire wolves closing in on an unlucky ungulate, or hooved animal, only for the hunt to end in the sticky, unforgiving substance that gives La Brea Tar Pits its name. Centuries of hunts preserved in the tar have provided researchers with an abundance of carnivore specimens, allowing researchers to connect changes in climate to changes in these predators over time. But what about their unfortunate prey?

“We’re just kind of scratching the surface with herbivores, because 70 to 80 percent of the specimens are carnivores. The complete opposite of most other sites. The herbivores have kind of been swept under the rug because of that,” says Josh Cohen, lead author on the recent paper in the journal Palaeogeography, Palaeoclimatology, Palaeoecology.  The research was part of a multi-year project funded by the National Science Foundation to explore the impact of climate change on certain species of large animals found at La Brea Tar Pits. 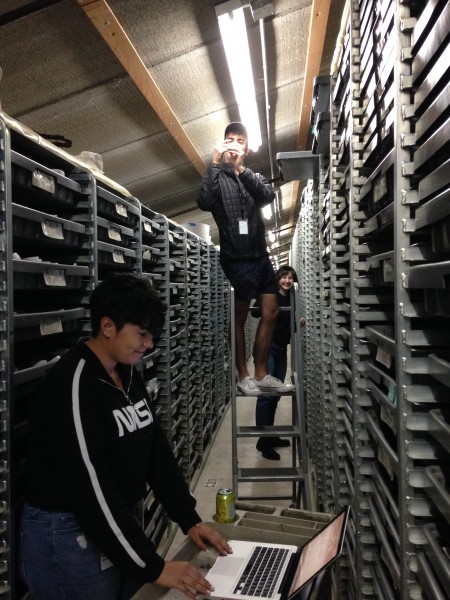 “The prevailing idea used to be that we already know everything about the Tar Pits,” says Dr. Emily Lindsey, Assistant Curator and Excavation Site Director at La Brea Tar Pits and coauthor on the paper. “But that’s 100 percent not true.”

Understanding how extinct animals like the giant camel Camelops hesternus, the bison Bison antiquus and the horse Equus occidentalis dealt with climate change can help us understand the resiliency of their modern relatives in the face of our current climate crisis. Cohen, Lindsey and their team decided to get data directly from the horse’s mouth (and the camel’s and the bison’s).

The Geology of Teeth

Mesowear: it’s not a new fashion trend. It’s a way of studying an animal’s dietary habits, even from beyond the grave. Just as modern valleys tell the story of vanished glaciers, the wearing of teeth tells the story of food long gone down the digestive tract. Different foods cause teeth to wear differently, allowing paleontologists to infer animals’ feeding habits. Think of it like a built-in food diary for herbivores. There are basically two kinds: grazing and browsing.

Herbivore teeth with more abrasion-dominated pattern reflect a life spent grazing, primarily subsisting on grass. Constantly chewing on the fibrous green blades (and the inevitable bits of dirt) acts a little bit like sandpaper, wearing down the surface of the tooth. Browsing herbivores sustain themselves on whatever’s around and edible, things like shrubs, leaves and soft shoots. This kind of diet leads to attrition-based wearing, when tooth-on-tooth impacts produce most of the dental marks, leaving the tops of teeth worn down.

To get a sense of how climate change affected these animals’ diets, Cohen, Lindsey and their colleagues looked at specimens from five different pits, or time bins, representing pretty drastic changes in climate: the ebb and surge of glacial cold of the Pleistocene (Ice Ages) into our more consistently warm, modern Holocene epoch. Mesowear is visible to the naked eye, Cohen explains, so student researchers examined “a huge tray of teeth” onsite, scoring them on a spreadsheet while offsite students used photos to accomplish the same thing.

One big takeaway according to Lindsey: “Camels can be really flexible eaters, depending on where they are living and what resources are available.”

One big takeaway according to Lindsey: “Camels can be really flexible eaters, depending on where they are living and what resources are available.”

“The big takeaway is that their diet didn’t change over time, despite presumed climatic changes,” says Cohen. Even though they investigated time bins from periods with starkly different climates, the team found little shift in diets, except for camels. Lindsey points out that bison and horses can have a lot of variation in their diet, but seem to be eating the same things despite the climate, at least at the Tar Pits. “The coolest take-home of this paper: a horse is a horse is a horse,” says Lindsey. “But the camels, depending on where they were living in space, had a lot of diet diversity. They’re eating different things depending on where they’re living.” The study looked at data published on other paleontological sites across the country, giving researchers a better idea of these animals’ diets. The result pointed to a camel-shaped hole in published research among other things. “We really got to understand what we didn’t know about herbivores in the Pleistocene,” Cohen adds.

So is this good news for these animals and Los Angeles as we face down climate change? Maybe. “When everything is going haywire, when we have sea levels that are lower...the Tar Pits have maintained some level of stability,” Lindsey says. There’s still more data stuck in fossil teeth, and paleontologists at the Tar Pits are using innovative techniques to suss it out. Examining a camel tooth layer by layer could unlock what they ate over a lifetime revealing migration routes, the focus of one upcoming study. Researchers like Cohen and Lindsey, along with our new Paleobotanist Assistant Curator Dr. Regan Dunn are part of a renaissance happening right now at La Brea Tar Pits, with researchers employing new tools and methodology to study old fossils.

Take a closer look at Bison antiquus below.

Understanding how animals survived (or didn’t) the drastic changes in climate over the Pleistocene can help us prepare them for the drastic changes ahead, and when it comes to La Brea Tar Pits, we’ve barely scratched the surface of what we can learn about climate change’s effect on Los Angeles’s ecology and the animals that used to call it home. Lindsey notes: “We weren’t here, right? So all we have is the fossils. Fortunately for us, Rancho La Brea has the most complete fossil record of this time period anywhere on the Earth.”