By: Tyler Hayden
Share: Share page on facebook Tweet this page
212 million years ago, in what is now Ghost Ranch, New Mexico, a group of Dromomeron romeri pause for a drink while several pterosaurs, now known to be their close evolutionary relatives, fly overhead. Image by Stephanie Abramowicz, Dinosaur Institute, NHMLAC

MISSING CHAPTERS FROM THE BOOK OF LIFE

If we’re talking about flying reptiles, we’re talking about pterosaurs. It’s right there in the name from Greek pteron as in ‘wing’ and sauros as in ‘reptile’. These winged reptiles soared over the Age of Dinosaurs, but how did they first take to the skies? Since the first pterosaur fossil was described in 1784, when and how these animals became the first vertebrates to achieve flapping flight (as opposed to gliding) has remained a mystery. In a recent paper published in Nature, paleontologists, including our own Associate Curator of the Dinosaur Institute, Dr. Nate Smith, identify the small wingless reptiles called lagerpetids as the closest relatives to pterosaurs. Some of the key specimens that helped solve the centuries’ old mystery were uncovered at Ghost Ranch, New Mexico, site of a multiyear, ongoing excavation project co-led by Smith, to collect Late Triassic (about 237 to 201 million years ago) fossils from the Hayden Quarry. Ghost Ranch has produced tens of thousands of fossils from two dozen different species of animals, helping researchers shed light on the world of the Triassic when pterosaurs first took flight.

Pterosaurs appear in the fossil record ready for take off, wings and all. While some later pterosaurs (e.g., Quetzocoatlus from the end of the Cretaceous, around 6 million years ago) would have blotted out the sun with their imposing wingspans, the earliest pterosaurs (from the Triassic) were small, and so their remains were less likely to be fossilized. Those same adaptations that would have helped pterosaur ancestors take the skies – extremely light bones for instance – would make them very delicate and unlikely to make it into the fossil record. “Darwin devoted a whole chapter of On the Origin of Species to the imperfection of the geological record, and maybe you can think of the fossil record as a book where there are not just words removed kind of sporadically throughout the pages, but there are places where there are whole reams of pages or even chapters that might be removed as well,” Smith said. Until their discovery in the 1970s, lagerpetids were one of those missing chapters.

The bits and pieces of lagerpetids (the name means "rabbit-reptiles") recovered over the decades helped fill their chapter in the book of life with peculiar details. “One of the things that sticks out is they have really weird feet,” Smith said. Lagerpetids were functionally didactyl, meaning they had only two large toes per foot, a relatively rare feature. Small, multi-cusped teeth in an excavated skull revealed they were likely insectivores. Initial discoveries mostly consisted of hip bones and hind limbs, with anatomical markers that suggested the spotty chapter on lagerpetids could fit somewhere before the dinosaur section in the book of life. It was work by Smith’s team at Ghost Ranch, and discoveries of new species such as Dromomeron that first demonstrated lagerpetids were more diverse and had a longer evolutionary history than previously thought, and that they even co-existed with dinosaurs in some Late Triassic ecosystems.

As more remains were discovered, a clearer picture began to form, pushing lagerpetids towards pterosaurs. “They have relatively elongated forelimbs compared to similar relatives. They have a little hook on the top of their femoral head (the top of their femur). This is something that we actually thought was unique to lagerpetids, but now we find it in pterosaurs as well. So they don't have the fully interned femoral head like dinosaurs, but they have their own unique thing going on. They fuse up some of their ankle bones like pterosaurs do as well,” Smith said. The more fossils the team found, the clearer the connection became. Even without wings, skeletal features of these “rabbit-reptiles” suggested a closer relationship to pterosaurs than anything else in the fossil record. A closer look at their ears (more precisely, their inner ears), pointed to a possible flight plan.

While they do share anatomical characteristics with pterosaurs, lagerpetids didn’t exactly look ready for take off. They didn’t have wings, or the elongated fourth digits that pterosaurs have, for example. The surprising pre-flight gear lagerpetids were packing: the beginnings of a curly inner ear. Inner ears play an essential role in balance and stability. “One of the things that people have noticed for a while is that in animals that fly, like bats or like birds, or animals that kind of can otherwise move through three dimensional environments that are very agile, like a lot of primates, small monkeys and stuff, the shapes of those semicircular canals varies a little bit,” Smith said. The curlier the inner ear, the more agile the animal.

“The best way to think about it is that some of them get a little more loopy, and it helps provide finer detection of shifts and movements in a three dimensional environment.” Deftly navigating the three dimensional environment was essential for pursuing small insect prey, or to avoid becoming small reptile prey yourself. “And so all we're kind of noting there is that when we look at the semicircular canals of Dromomeron, they have a beginning of that kind of loopy change that we see also in pterosaurs,” Smith said, emphasising that this didn’t mean lagerpetids were on the verge of flight themselves: “it probably just means they were agile animals.” It points to the potential of flight somewhere way down the evolutionary line, and that potential more closely connects lagerpetids to the pterosaurs who would, in turn, need to be even more agile once they took to the skies.

Paleontologists cracked the case of the preflight inner ear without physically cracking any valuable fossil skulls. “Before the advent of CT scanning, you couldn't look inside the skull of an animal,” Smith said. A couple decades previously, the only way to see things like the brain case or inner ear was to “sagittally section through the specimen and record that, but then you'd be left without the specimen afterwards.” Paleontologists got a non-destructive look inside lagerpetids’ noggins with the same technology doctors use to look at our brains.

CT (computerized tomography) scanners blast X-rays at a subject, letting researchers get a three dimensional cross section of a specimen, something like looking at a slice of bread without having to cut the loaf (or brain, or priceless fossil). “So it's a lot more powerful and you get a lot more resolution, but essentially it's the same kind of thing,” Smith said. “You're detecting differences in contrast. Instead of tissues in this case, it would be between the rock matrix and the actual permineralized bone as well and/or empty spaces in the bone and things like that.” Computer software then helps separate the sediment from the bone, exposing the inner workings of extinct animals like lagerpetids. CT scanning has become an indispensable tool in paleontology.

Connecting lagerpetids to pterosaurs isn’t the end of the story by a long shot. A critical link in the evolutionary history of pterosaurs has been found, but it raises more questions even as it provides some answers. “We also created two more missing links between lagerpetids and pterosaurs, and between the ancestor of pterosaurs, and dinosaurs, and lagerpetids,” said Smith. Answering one question raises two more, but it also points researchers to what the next answer might look like. Knowing the characteristics of an early pterosaur relative helps paleontologists better understand how they developed flight and what the animal linking pterosaurs and lagerpetids might look like. One way to think of it, lagerpetids were moved from the dinosaur branch of the tree of life on to the pterosaur branch according to Smith, which can sound like a small move, but “Moving that little branch on the evolutionary tree can be important because those character traits and the pattern of the tree make predictions about what you're going to find next, and potentially where to look for it.”

That animal, the next missing chapter in the section of the book of life marked pterosaur, could be more delicate than lagerpetids, with features like lighter bones needed for flight making them less likely to survive into the fossil record, but Smith is optimistic about finding them. “In terms of what lies between lagerpetids and pterosaurs, we'll probably start seeing stuff trickle out in isolated bits here and there, and then hopefully more complete skeletons that really flesh out the picture more,” Smith said. Sites like the Hayden Quarry offer a window into the Late Triassic, when animals like dinosaurs and pterosaurs first arose alongside the first appearance of modern groups like frogs, turtles and even mammals. It’s among this flourishing of animals that paleontologists will be looking for the next chapter. 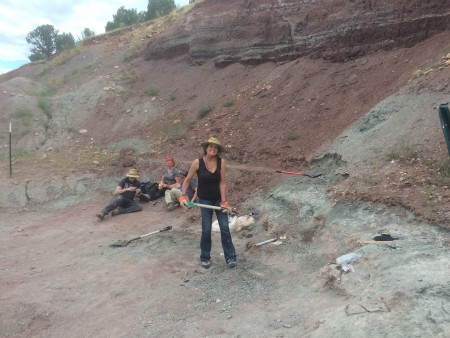 NHM expeditions to Ghost Ranch and meticulous work of paleontologists helped by donors like Sheila Brennan, pictured here, might uncover the next link in pterosaurs' evolutionary history.

Whatever comes after lagerpetids is likely buried in the Hayden Quarry and other Late Triassic sites that produced the specimens cited in this paper. It could start small, a fossil that makes a paleontologist stop and scratch their heads. “It's going to come just like the story of Dromomeron where now we're getting some of the first cranial material, some of our first articulated skeletons. But the first piece we found at the Hayden Quarry back in the day was this one leg bone, and then some lower leg and some ankle.” With the confidence of someone who’s read the ending of the book, Smith is certain that paleontologists will uncover the next part of the story. “It's going to be delicate, and fragile, and probably really rare, but it's out there waiting to be found.”

More From This Issue

The Art of Museum Education

A Message From Our President

A Winter's Day in Wild L.A.

The Magic Behind the Making of Rise Up L.A.